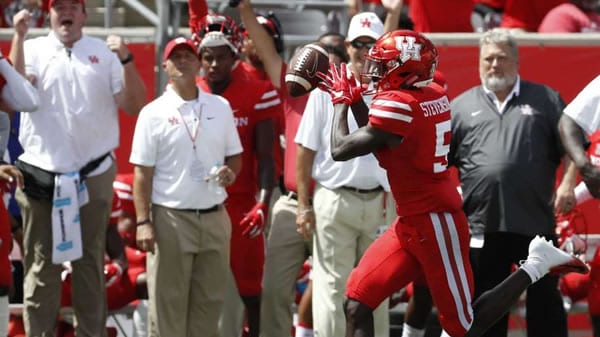 After five attempts to play its season opener, Houston finally gets to play its first game of the season against a Tulane squad that took out a lot of frustration on Southern Mississippi. The Green Wave rolled over the Golden Eagles to the tune of 66 points, mainly behind a running game that ended up with seven touchdowns when all was said and done. Now they face a known unknown, as the Cougars haven’t played since November 2019 but have split their past four matchups against the Green Wave.

Last season, these teams showed a flair for the dramatic, as Tulane pulled out the win on a 53-yard touchdown pass with just three seconds left in the game. But both teams will have different quarterbacks than they did a season ago, and both are eager to make amends for how they finished things last season. Which team arrives ready to make a statement?

How the Public is Betting the Tulane/Houston Game

The line and the total have both moved two points since the opening, with the line going from Houston -5 to the current number of -7 and the total jumping from 59 to 61.

Virginia:
Running backs Tyjae Spears (knee) and Corey Dauphine (Achilles) are both out for the season.

Houston:
Running back, Mulbah Car is questionable with a back injury. Linebackers Terrance Edgeston and Zamar Kirven are questionable with undisclosed injuries. Defensive lineman Sedrick Williams opted out of the season and running back Ta’Zhawn Henry, and kicker Bubba Baxa are both ineligible.

On the one hand, Tyjae Spears is now down for the season, forcing Tulane to reset its running back situation. On the other hand, Spears went down early in the win over Southern Mississippi, and the Green Wave still rolled up 427 yards on the ground against the Golden Eagles, 377 of which belonged to other backs. Cameron Carroll now becomes the main man in the backfield for Tulane, and if his debut as the Green Wave’s top runner was any indication, Tulane is in good hands. Carroll ran for 163 yards and three scores last game, and he’s got a solid No. 2 behind him in Stephon Huderson, who also topped 100 yards against the Golden Eagles.

The problem Tulane has is that it doesn’t have much of a passing game to speak of. Keon Howard struggled so badly against Southern Mississippi that he found his way to the bench in favor of freshman Michael Pratt, whose numbers were merely pedestrian against the Golden Eagles. Pratt will get the start, which says that Tulane is going to rely on its potent ground game to get the job done.

Truth be told, that’s probably the right way to play this situation for the Green Wave anyway. Given that the defense is not much of a strength for Tulane, its best hope is to keep the ball for as long as possible and keep the defense on the sidelines. For the Wave, 20 points have been the magic number in this matchup: over the past 15 meetings, Tulane is 3-1 against Houston when it scores at least 20 points and 0-11 when it fails to hit that number.

Air raid systems tend to produce quality quarterbacks, but Houston never really got going last season. Clayton Tune only ended up throwing for 1,533 yards last season after current Miami quarterback D’Eriq King quit the team four games into the season — one of which was a loss to Tulane.

The biggest question for the Cougars is going to be whether Tune is on the same page with his receivers. The talent is there for Houston to have a great offense, as Marquez Stevenson put up more than 900 receiving yards last season and hauled in 52 catches. But nobody else got more than half as many catches as Stevenson, and Tulane’s defense is good enough to slow down Stevenson and keep him from taking over the game. Stevenson only caught two passes last year for 95 yards against the Wave, and even though one was a touchdown, Tulane still was able to get the job done. If Stevenson doesn’t get started early, it’s going to fall to Tune to get his other receivers involved. Houston does have a bit of a running game with Kyle Porter, but he’s not nearly as potent as Tulane’s stable of backs, so the Cougars are likely to focus on getting the job done through the air.

When the Green Wave plays on the artificial green, the results usually end up being green for their bettors. Tulane has cashed in 14 of its last 17 games on turf, which isn’t a surface that Houston really enjoys. The Cougars might want to think about asking Tilman Fertitta to spring for a grass field because Houston is just 1-4 ATS in its past five games on turf.

Tulane’s offensive struggles in the past play well with another trend: the under has cashed in four of the past five matchups between these teams. It’s hard to look at the under as a real option considering these teams scored 69 points last year, but what usually happens is the total gets set too high, and these teams end up using their knowledge of each other to hold the score down.

It could be a warm night in Houston, with temperatures in the mid to high 70s on a partly cloudy evening.

I think too many people expect Houston to be what it started last year as, but I don’t think the Cougars are going to be at that level right out of the gate. Teams tend to look rusty in their first game, and Houston hasn’t played anyone since November of last year.

Plus, Tulane is exactly the wrong team for Houston to try to play fast against when it hasn’t played anyone yet this season. The Green Wave’s biggest strength is its dominant ground game, which means Tulane can keep the ball for a good chunk of the game and keep Houston’s air raid from scoring too quickly. I think there’s a good chance that Houston runs out of gas in the fourth quarter against an opponent that’s been playing actual games, and it wouldn’t shock me at all if Tulane manages to win the game outright.

But with the number moving toward Houston, I’d wait to take the Green Wave and see if you can get another point or two out of the deal. Regardless of where the final number ends up, I want Tulane and the points here.

Take Tulane +7. Note: Many are bummed out that 5Dimes left the USA betting market. Did you know that there is another Book that offers you the ability to bet on games at -105 odds? —> BetAnySports! Same betting platform and same great odds! Click here to sign up now!