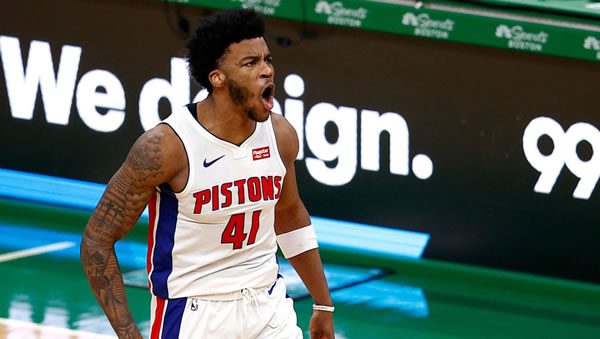 The Philadelphia 76ers enter this game with a record of 2-2. So far, both of their victories have come vs. Eastern Conference opponents. If they can knock off the Pistons, it will be their first win of the season at home.

The 76ers last played on Tuesday night, falling to the York Knicks, 99-112. After winning the first period, the Knicks opened up a big lead with a 39 point second quarter.

Philadelphia’s leading scorer was Tobias Harris, who tallied 23 points in 33 minutes of action. Their best player, Joel Embiid, was held to just 14 points. Despite playing 30 minutes, he only took seven shots, connecting on two.

One of the bright spots on the team was Danny Green, who hit four of eight shots from downtown. Tobias Harris connected on just two of his six three-point attempts.

Off the bench, Goerges Niang contributed 13 points and was one of the few players with a positive plus-minus value. While Niang was on the court, the Sixers were +1.

The Detroit Pistons enter tonight’s matchup desperate for a win, losing their first three straight games. Their last contest came Monday night vs. the Atlanta Hawks resulting in a 122-104 loss.

In the game, Kelly Olynk and Saddiq Bey shared the team lead in scoring. Both players walked away with 21 points. Both players were efficient with their opportunities, shooting 53% and 50% from the field.

Bey was the Pistons leading three-point shooter, hitting 3/8 shots from beyond the arc. Rookie center Luke Garza only logged 12 minutes off the bench but had the worst plus-minus rating on the team. While Garza was on the court, Detroit was -22.

Detroit Prefers To Slow The Game Down

The Detroit Pistons are one the league’s slowest-paced teams, preferring to limit a game to fewer possessions. Last season, the Sixers had their lowest win percentage against such teams. On average, these games went two possessions below expectation.

The Philadelphia 76ers are a league-average team in terms of pace. When Detroit plays the team’s hoping to play a faster style, they get teams to play down to their level. On average, these games fall five possessions below expectation. However, this hasn’t been a recipe for success, as they win just 33% of these contests.

Philadelphia Has The Offensive Edge

One of the reasons Detroit struggles to pull out wins is they are one of the NBA’s least efficient offensive units. When the 76ers square off with units struggling to score, they win 88% of their games with an average margin of victory of 11 points.

In games when the Pistons are forced to play a better offensive team, they come out victorious just 37% of the time. However, on average, they lose by just two points.

The discrepancy in tonight’s matchup comes on the defensive end, where Philly ranks among the league’s top units. I don’t expect Detroit to handle this well as they win just 21% of the time vs. good defenses.

On offense, the 76ers take advantage of their matchups against poor defenses. In these contests, they score five points per possession above the league average. Given that Detroit is a below-average unit in defensive efficiency, I expect Philadelphia to have a big night offensively. On average, they win these games by an MOV of 7 points.

The Pistons and Sixers met up three times last year, with Philly pulling out two wins. Between the three games, the 76ers scored 336 points to the Pistons 333.

In game two of the series, Detroit had the largest margin of victory, defeating Philadelphia 119-104 at home.

How the Public is Betting the Pistons vs. 76ers

62% are betting the Sixers against the spread.

In their past five matchups, the Sixers and Pistons have gone over the total.

The total has gone under in 5 of Detroit’s last 7 games.

When the Sixers take on the Pistons at home, Philly is 5-0 ATS.

In tonight’s matchup, my model shows the 76ers pulling out a 109-103 win. Even though the Pistons have yet to win a game, I recommend taking Detroit to cover the -10.5 point spread.

My favorite prop bet of the night is to take Seth Curry to go over his point total prop of 15.5. Curry is a sure thing to log at least 30 minutes and get his fair share of 3 point attempts.