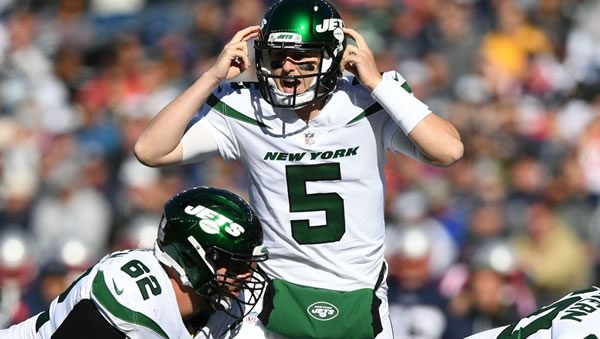 Point Spread: NYJ +3/MIN -3 (Bovada – Do you live bet games? If so, you need to see their platform! It’s incredible! All on one page, not clunky and bets process FAST!)

The New York Jets take on the Minnesota Vikings on Sunday in a big week 13 showdown for both teams. The Jets moved to 7-4 on Sunday with a dominating 31-10 win over the Bears, but things get considerably harder this week against the 9-2 Vikings. After beating the Patriots, 33-26, on Thanksgiving, the Vikes get the long week and are now back at home for the third game in a row. They won’t be easy to beat, but the Jets are playing good defense and got a big boost on offense with QB Mike White. Who can get us the cover in Minneapolis on Sunday?

Status of the Vikings

Coming off an unsightly 40-3 defeat to the Cowboys a few weeks back, the Vikings’ Thanksgiving win over a tough Patriots team was a welcome development. Despite being in a tough matchup defensively, Kirk Cousins was able to do damage, with Justin Jefferson having a big day and Adam Thielen adding nice catches and a TD. They face another tough AFC East defense this week, but at home and with the weapons they possess, the Jets can’t bank on their defense alone. They’re going to need to see the offense produce.

Despite getting back on the right track last Thursday and having really thrived under first-year head coach Kevin O’Connell, there are still a considerable number of holdouts concerning the Vikings being a real contender. They have a stranglehold on the division and are headed to a high postseason placement. But between the failings of Kirk Cousins, a cast around Jefferson that doesn’t always thrive, and an exploitable defense, it’s understandable why people are withholding praise. Throw in some wins in some seemingly easy spots, and the Vikings start looking less-fearsome. But the Jets are still up against it this week—make no mistake.

Potential Issues for the Jets This Week

The Jets have done a lot of good things this season, so it doesn’t come down just to last week. But beating a Bears team without Fields might not be the fairest gauge to use to indicate future success. Mike White was really good in doing what we saw him do last season, which is to provide a little spark to a struggling offense. Last year we also saw White’s success come to a sudden halt. The Minnesota defense is not a “D” that will typically be that brick wall to opposing offenses who are starting to build up some good momentum. But with Cousins and the offensive firepower he can wield, the Jets won’t be seeing a one-way story unfold as they did last week.

The Jets don’t get out to Minneapolis that often. While they won’t be exposed to late-season NFC North weather in this building, it’s a little bit of an out-of-the-way locale for the Jets. They are facing a team that has been digging their feet in at home for several weeks, coming off the long week. There is no doubt that we’ve seen this Jets’ defense really boost its form over the last handful of games, but just as we nit-picked Minnesota’s success, it’s fair to point out that outside of their wins over Buffalo and Miami, the Jets haven’t exactly been beating a murderer’s row of opponents.

Good Spot for the Vikings?

One could think this is a favorable spot for the Vikings, with the aforementioned reasons making this seem like a reasonable enough spot. It’s just that with six wins in their last eight games, the Jets are really seeing some things come together nicely. We’ve seen good defensive units flummox Cousins and the Vikings’ offense before, and I’d look for Saleh and his staff to dial up something good for Sunday. While taking it to the Bears’ defense might not be the best gauge, they, in fact, did look better with White. The Jets were more aerial, and even with lead back Michael Carter (questionable) going down, they were still able to run the ball well in spots. Whether White can come close to what he did against Chicago or if their defense will melt under greater pressure remains to be seen.

It’s just not easy to take a team that overcomes a lot to become a good team and put a stop to it. When teams like the Jets get on a roll, it can be hard to separate them from the newly-found good momentum they worked so hard to find. After allowing ten points in two straight games, which followed by allowing only 17 to Buffalo, albeit with Allen hurt, the Jets’ defense might not be easy to resist with their overall stoutness and playmaking. If Cousins is off-key, the Jets can capitalize on it in a big way. And if the Jets can key in on Jefferson and curtail Minnesota RB Dalvin Cook, Minnesota might not have a ton of answers.

It’s possible that being in certain contexts have painted the Jets in a favorable light, one that will come back to earth some this week against a good team in unfamiliar road territory for the Jets. I just sense that this version of the Jets is pretty solid and is going to be hard to dissuade, especially defensively. And while White and the Jets offense could easily start resuming the same form we saw the week before last, which forced the quarterback change, I see them being able to take advantage of a Minnesota defense that will need to address some things if looking to make a serious run this season. I’ll take the Jets this week.

Loot’s Prediction to Cover the Point Spread: I’m betting on the New York Jets plus 3 points. Bet your Week 13 NFL predictions for FREE by taking advantage of a 100% real cash bonus up to $500 at the web’s oldest and most trusted sportsbook when you enter bonus promo code PREDICTEM on the Special Offers page at Everygame Sportsbook! In business since 1983!