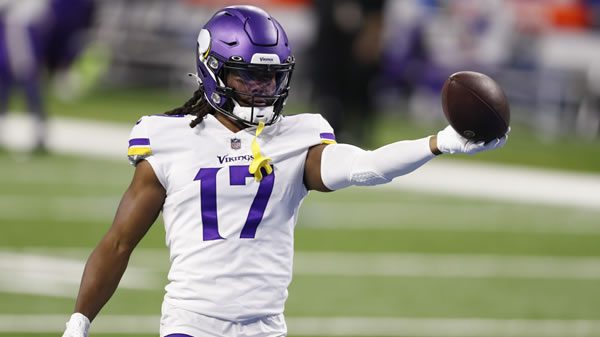 The Minnesota Vikings will take on the Baltimore Ravens in an inter-conference showdown in week 9. MyBookie (Use bonus code PREDICT100 and get a 100% bonus up to $300!) has made the hometown Ravens 5.5 point favorites in this match-up and set the game total at 49. Neither of these teams has been good to their backers this year, but let’s grab the points and the Vikings in Baltimore. Here is the handicap.

These Teams Are the Same Team

Baltimore is 5-2 while Minnesota is 3-4. How can they be the same team? Both teams came into the 2021 campaign expecting to battle for a division title, with a lot of questions on the defensive side of the ball and some electric playmakers on offense. Baltimore has finished on top in 5 of their games, but they could have easily lost to the Chiefs, Lions, and Colts and be sitting at 2-5. The Vikings, on the other hand, could have easily won against the Bengals, Cardinals, and Cowboys and be sitting at 6-1. Those games all came down to coin flip plays as the clock ran out, and the result could have gone either way. Both of these teams have the capability to play up to any level of competition but also have proven that they will play down to the level of their opposition when they are the better team. What do those 3 wins that could have gone the other way for the Ravens and the three losses that the Vikings could have won have in common? Less than 5 points decided them all except for an overtime touchdown in one of the Raven games. With these two teams squaring off with each other, 5.5 points is like a pot of gold.

The Ravens Won’t Bury the Vikings

In years past, we would have to concern ourselves with the Ravens running the ball down the Vikings throats in this one – but not this year. Baltimore’s offense has had to transition to a pass-first team in 2021. The loss of their top 3 running backs in the pre-season has left Latavius Murray, Devonta Freeman, and Le’Veon Bell to handle the running back work. Freeman has pretty good stats in minimal work, but none of these runners are anything for the Vikes to fear. Of course, QB Lamar Jackson is the runner that strikes fear in opposing defenses, but without a halfback to keep defenses honest, Jackson can be controlled on designed runs. Baltimore still puts up solid rushing stats thanks to Jackson’s scrambling, but Minnesota should be disciplined enough in their pass-rushing to make Jackson move the ball from the pocket. Jackson has improved as a passer this year, completing 65% of his throws for 8.5 yards per attempt, but he still struggles to throw the ball outside of the numbers and has thrown five interceptions, fumbled five times, and taken 21 sacks.

The Viking defense matches up very well with Baltimore. They have 24 sacks in 7 games though they did lose defensive end Danielle Hunter, in the Cowboy game. Minnesota should still be able to get pressure on Jackson and mostly contain Jackson on the ground. The Vikings held the Cowboys to 78 rushing yards Sunday night, showing the rushing defense has been improving every week. The Vikes should be able to put Jackson in 3rd and long – where he hasn’t been very good. Baltimore is 26th in the league in converting 3rd downs, being successful only 36% of the time. I don’t look for the Raven offense to go crazy this week and have their way with the Viking defense.

Minnesota’s Offense Can Keep It Close

This is the perfect scenario to back Kirk Cousins and the Viking offense. The Baltimore defense is middle of the pack in points allowed per game but is 31st in the league in yards per play allowed. Dalvin Cook should have success moving the ball on the ground, and Cousins will be able to work to Justin Jefferson and Adam Thielen through the air. Cousins has completed just under 70% of his passes while throwing only two picks and taking only ten sacks. The Vikings average 23 points per game, and there is no reason to think they won’t get there again this week. The Vikings also struggle on 3rd down conversions, ranking just below the Ravens while being successful at a 36% clip.

The Raven defense has been one of the most disappointing units in football this year. The defense that used to be feared throughout the league has only registered 15 quarterback sacks and doesn’t have a player with more than three sacks. They used to have lock-down cornerbacks, but the Colts and Bengals averaged 400 passing yards against them in two of the three weeks prior to the bye. They did hold the Charger passing game in check, but that looks more like the outlier. Baltimore has only been marginally better against the run, ranking 15th in the league, allowing 4.2 yards per carry. If you are hesitant to bet the Vikings in this game, it can’t be because of the Raven defense.

Take the Points and the Vikings

I don’t understand why these teams aren’t considered equal, or maybe Baltimore is slightly better and the spread right on a field goal. We have two teams that are going to play a dead heat for 59 minutes, and the team that has the ball last will have a chance to win the game with a field goal. Let’s get on the side that is getting 5.5 points. Play the Vikings with the points. Did you know… that you can bet on games at -105 odds instead of -110? Imagine how much money that would save you over the course of a year! Find this killer offer at BetAnySports!