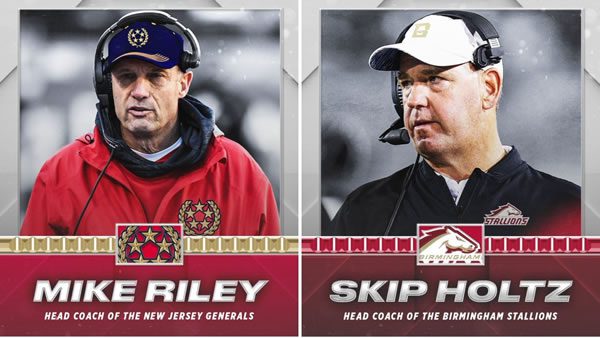 After 37 years away, the United States Football League is finally back on the field. Spring football has been tried multiple times since the USFL last played in 1985, but nobody has done it anywhere near as successfully as the USFL did before it flamed out trying to compete with the NFL. The revival brings a totally unique betting opportunity, as we’ve got a clean slate with teams that nobody has ever seen before.

As such, the best way to give yourself an edge is to take a look at the coaching staff’s histories to try to tell what kind of team they might field in a new league. When everyone is equal from the beginning, it’s usually the teams with experience in doing this before who tend to do the best. Home field won’t be a thing in this new league, as the league will play all of the first season in Birmingham, representing its cities in name only. This will be as true a test of talent as we’ve seen in professional sports, and it’s a situation where the sportsbooks don’t know any better than anyone else, which means opportunities are available.

Mike Riley has done this before as the coach of the Alliance of American Football’s San Antonio Commanders, which gives the Generals a slight edge in the early going. Expect Riley to construct a vanilla gameplan that’s based around not turning the ball over, as he’s used to seeing his team take a game or two to figure things out when they’re trying to come together on the fly.

To that end, quarterback Luis Perez has also done this before. Perez competed in the XFL for the New York Guardians and proved effective at leading the club, winning his final two starts before the league folded because of COVID. He averaged more than 10 yards per completion and tossed three touchdowns in those victories, suggesting that he could have developed further had the league not shut down.

Perez is not a speedster and will take what the defense gives him, which means Woody Brandom could play a real role in the Generals’ game plan. Brandom, the New Jersey tight end, checks in at 6-foot-5, 260 pounds and gives Perez an outlet should he find himself in trouble. The running game is not expected to be a big strength, as former Dallas Cowboy practice squad player Mike Weber is expected to receive the bulk of the carries and has never gotten going in his professional career. However, this game could be an exception, as Birmingham’s defensive line doesn’t seem to have the experience to match up to a New Jersey line anchored by one-time Seahawk left tackle Terry Poole.

DEPOSIT $500 AND GET $500 FREE WHEN YOU USE BONUS CODE PREDICTEM AT BETNOW!

The big question for Birmingham is who is going to start under center for the Stallions. Alex McGough would seem to have the edge based on the fact that Birmingham picked him during the first round of quarterback selections in the USFL draft, but J’Mar Smith played under coach Skip Holtz at Louisiana Tech and presumably knows the offense from their four years together in Ruston. Plus, McGough allegedly had issues with grasping the playbook during his time in Seattle with the Seahawks, which could lead Holtz to turn to a more proven option (at least, more proven in his system).

The Stallions’ lines are a little suspect, so they’ll be tasked with keeping the ball moving through the air and trying to put up points that way. Holtz’s teams were well known for giving up points, but they also came up with some big numbers when they went on offense. They’ll have to do that if they hope to get a win here.

As this is the inaugural USFL game (or at least, first in 37 years), there are no betting trends yet to try to decipher.

A thunderstorm and showers could make it difficult to pass the ball very often, so this matchup could favor the under. Temperatures will sit at 78 degrees, with a 65 percent chance of playing the opening matchup in the rain.

Birmingham’s perceived weakness in the trenches and Riley’s experience at putting together a team in the spring says that the wrong team appears to be favored in this matchup. These conditions favor a team that can run the football, and it appears that New Jersey will be able to do that better than Birmingham.

New Jersey might very well become the weak link in the league when all is said and done, but for the opener, I like the Generals and the points in a game that I expect will come in under the total of 43.5. Bet your USFL predictions for FREE by taking advantage of a 50% real cash bonus at one of the oldest and most trusted online sportsbooks: Bovada! They offer some of the fastest bitcoin payouts on the web, you can bet on games live-in-progress and they give their clients rebates on every wager; win, lose or draw! Click here to sign up now!