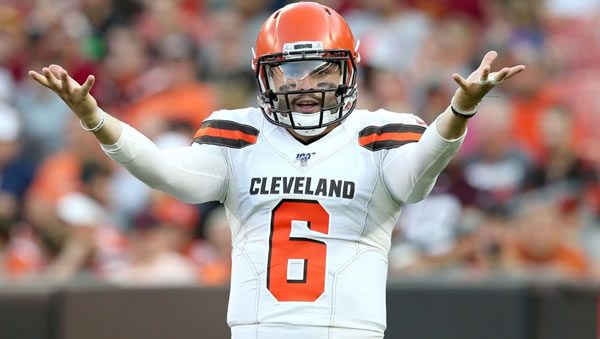 Da’Bears head to the shores of Lake Erie to take on the Browns this Sunday in a clash of 2 teams sitting at 1-1. Bookies have made the Browns 7 point favorites and set the game total at 46½. Let’s take the touchdown and buy a Bears ticket. Here is the handicap.

Chicago’s Defense Can Slow Down Baker

Baker Mayfield and the Cleveland Browns have had a solid start to their 2021 campaign. Their offensive scheme to run the ball with Nick Chubb and have Mayfield utilize play-action passes has proven very efficient. They are 6th in points scored, averaging 30 points per game, and 3rd in rushing yards behind just the Ravens and Eagles. Those points and rushing yards came against 2 of the worst defenses in the league, and they will have tougher sledding this week. Mayfield has completed an unbelievable 82% of his passes, hooking up with ten different receivers. But Odell Beckham Jr. has yet to get on the field as he recovers from his knee injury, and the Browns will also be without Baker’s favorite target Jarvis Landry this week. This leaves Rashard Higgens and Donovan Peoples-Jones on the outside to catch Mayfield passes. The two have combined for just four catches and 45 yards over the first two weeks. Mayfield will have to work to tight ends Austin Hooper, David Njoku, and running back Kareem Hunt. This trio has had success so far this year, but the Bears D will be the biggest challenge yet for the Browns.
The Bears have given up 51 points in the first two games, but 14 of those points were on coverage errors in Week 1 against the Rams. If those issues have been cleaned up, this is a stingy defense. They have only allowed 3.3 yards per rush, so they should be able to minimize the damage Chubb can do, leaving them only to be concerned with the play-action passes. The Rams’ two long Week 1 plays were off of play-action, and the Browns and Coach Kevin Stefanski run a very similar offense to McVay’s Rams. I’m not sure Mayfield could make either of the passes Matthew Stafford made against Chicago in week 1, but the Bears will make sure there is no repeat of the Week 1 bombs. I look for Chicago’s defense to come out strong and keep the scoring low in this one.

All signs are pointing to Justin Fields returning to Ohio and getting his first NFL start in Cleveland. Fields is green and could make some rookie mistakes similar to the interception he threw against the Bengals, but he also has upside that Andy Dalton doesn’t have. The Bears’ offensive line is horrible, so Fields will have some chance to extend plays and potentially make plays down the field that Dalton couldn’t make. Fields will create problems for the Browns’ defense in the running game, and the Browns have no tape on Fields or a Fields run offense to prepare for. David Montgomery has been the only bright spot on the Bear offense, and he should have better opportunities this week with Fields in the game. Look for Allen Robinson to get on track with Fields after catching just half of his targets through 2 weeks for 59 yards. Dalton was never the answer in Chicago, and Fields raises the ceiling for the Chicago offense.

Cleveland’s defense was supposed to be their strong suit coming into the year but hasn’t lived up to expectations the first two weeks. They are only 18th in yards per play against and worst in the league in at getting off of the field on 3rd down. We can understand having trouble against the Chiefs in Week 1, but Houston converted 57% of 3rd downs last week. With an elusive QB like Fields, the Bears should be able to continue that trend. Cleveland has only three sacks on the year, so Fields should be able to have time to work downfield, or at least time to find a scrambling lane. Look for the Bears to have success against this Brown defense and keep the game close.

The Spot Is Great for Chicago

Cleveland has turned their franchise around since Stefanski came to town. They have gone from the laughing stock of the league to a legitimate Super Bowl contender. But they haven’t learned how to handle success. Since the start of last year, they are only 4-8 as a favorite and looked lethargic the previous week against Houston as a double-digit favorite. Stefanski hasn’t proven he can get his team motivated to play teams they should beat, and that will come back to bite them this week. They are playing a rookie QB in his first NFL start, and they could easily think they can sleepwalk to a win.
The Bears, on the other hand, will be starting their QB of the future, so the team should be all in for this one. The veterans on this team know that Fields gives the team hope and will put it all on the line for him. Look for the Bears to come out fired up and the Browns to be a little flat.

Look for Chicago to stay within the number this week and maybe pull off a surprise win. The line has gone back and forth between 7 and 7.5, so keep your eyes open for the hook, and pounce when it is available. Bet your Week 3 NFL games for FREE by scoring a huge 100% real cash bonus on your first deposit of $100 to $500 at GTBets Sportsbook!