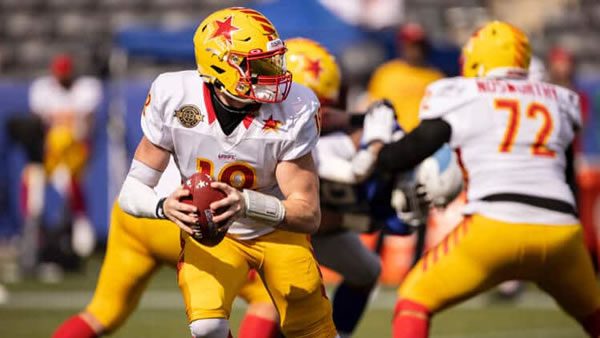 Both New Jersey and Philadelphia rode different sides of the ball to their first victory of the season in Week 2, as the Generals used a stiff defensive effort to stymie Michigan, and the Stars got their passing attack going against Pittsburgh to come out with the victory. Both teams seem to have their quarterback situation figured out, although these teams approach the position in very different ways.

The Generals opt to go with one quarterback when throwing and another for running plays, while the Stars will go five to 10 yards at a time and try to nickel and dime their way down the field. It’s not yet clear which approach is the right one, but whichever one proves the right one will own a 2-1 record and first place in the North Division. There’s no home field or seeding to worry about, but being essentially two games up in the race for a playoff spot on two out of three teams would be a big cushion three weeks into the USFL season.

When it comes to throwing the ball, New Jersey has its man in Luis Perez. Perez completed 68.4 percent of his passes against Michigan. While it wasn’t a flashy performance by any means, he at least was able to get more of a rapport going with Darrius Shepherd, who has emerged as his top target. The fact that the Generals only moved the ball for 258 yards in Week 2 likely had a lot to do with Michigan’s defense, and Philadelphia isn’t anywhere near as strong as the Panthers on that side of the ball.

That likely opens the door for quarterback No. 2, DeAndre Johnson, to find some real holes in the Stars’ run defense. New Jersey only averaged 3.5 yards per carry against Michigan, but again, that’s Michigan, which boasts one of the league’s best defenses. Philadelphia has been torched for an average of 147 yards per game on the ground and 187.5 yards per game through the air, and last week makes clear those numbers are legit. You could have explained part of that by the Stars having to face the New Orleans Breakers, who appear to be the USFL’s strongest team, but the Pittsburgh Maulers also moved the ball and put up 23 points on the Stars last week. Johnson and Darius Victor could have a field day on the ground against this defense.

Bryan Scott is going to get every chance to throw the ball and throw it a lot in this offense, and eventually, it paid off nicely for the Stars. He’s going to need a high volume of throws to get the 272 yards he threw for against Pittsburgh, but when he has time, he’s accurate with his passes and takes what the defense gives him.

The real problem here is that Philadelphia hasn’t been able to run the ball at all. The question is whether that’s because of the two opponents the Stars have faced or whether their running game is genuinely that poor, as they have legitimately faced two good run defenses. New Orleans might have the USFL’s best front seven, and Pittsburgh has actually done quite well in stopping the run against both Tampa Bay and Philly. The Generals haven’t given up much on the ground in two games with Birmingham and Michigan, which means Philly is likely to put the ball in Scott’s hands and ask him to hook up with Maurice Alexander and Jordan Suell as often as possible. Long drives with short passes might be the way to win this game.

Vegas seems to have a real read on this league so far, as the favorites are 7-1 SU and ATS through two weeks. Only Tampa Bay failed to cover as a favorite in losing to New Orleans, but the totals seem to be sorting themselves out a bit. The totals were 2-2 last week, and the league has gone 3-5 to the over on the season. New Jersey cashed on the over against Birmingham while coming in well under in Week 2 against Michigan, while Philadelphia was just under against New Orleans and obliterated the over against Pittsburgh.

Clouds will break apart during the evening, with temperatures falling to 63 degrees and winds at 7 miles per hour on a comfortable night in Birmingham.

Philadelphia’s suspect run defense isn’t really where you want to be when facing New Jersey’s two-headed quarterback system. This might be a game where Johnson plays more snaps than Perez because I don’t think that the Stars are going to be able to slow down Johnson if and when he gets the ball. I expect New Jersey to control the clock with its ground attack, and I think that leads the Generals to a mild upset. I’ll take New Jersey here. Bet your Generals vs. Stars prediction FREE by taking advantage of a 100% REAL CASH bonus on your first deposit up to $300 when you use bonus/promo code PREDICT100 at MyBookie Sportsbook!