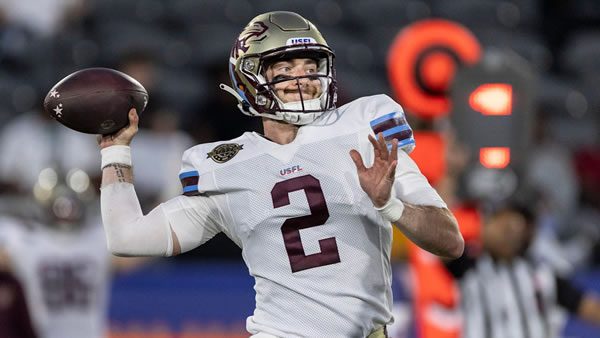 The alarm bells have to be going off for both Pittsburgh and Michigan, which are now the USFL’s only 0-2 squads after each got beat by North Division rivals Philadelphia and New Jersey, respectively, in Week 2. The good news for both is that the USFL’s forgiving playoff format means that two teams will get in out of the North Division, and there’s no home field advantage to worry about, so there’s still plenty of time for them to turn things around. But an 0-3 start would be tough to overcome with just seven weeks left, so these teams have to get rolling right away.

For Michigan, that means winning with defense. The Panthers have actually done an excellent job keeping points off the board, as they’ve given up just 20 points on defense this season. The problem is that the offense cannot get out of its own way, as the Panthers’ offense has scored a mere 18 points while giving up eight. Pittsburgh’s defense has been a bit more spotty, as the Maulers didn’t give up a second-half point to Tampa Bay but allowed three long touchdown drives as well as a short one set up by a turnover against Philadelphia. The Maulers did show some signs of getting on the same page with their passing game, but the run attack still looks spotty at best, not a great sign for a team that was supposed to be built around running the ball.

The good news for the Maulers is that Josh Love and Bailey Gaither were on the same page against Philadelphia, as Gaither caught seven balls for 117 yards and hauled in a score to give the Maulers a genuine chance at a victory. The bad news is that the way you beat Michigan is by running the football, and Pittsburgh hasn’t really shown that it can do that to this point. The Maulers still look lost trying to move the ball on the ground, as they haven’t had either of Garrett Groshek or Madre London establish themselves running the ball.

The problem for the Maulers right now is that not only have they not established the run, but there seems to be no Plan B if Gaither isn’t open. Pittsburgh gained 123 rushing yards against Philadelphia but needed 28 carries to do it, and other than one 35-yard catch by Delvon Hardaway, nothing else went for more than 13 yards besides a pass to Gaither. Michigan might be struggling to score, but its defense has been rock solid and is likely to focus much of its attention on stopping Gaither, which means that Pittsburgh has to come up with something else if it’s going to score.

Shea Patterson has not looked like a player who should have been taken with the USFL’s No. 1 draft pick. The former Michigan Wolverine was supposed to help the Michigan Panthers get off to a fine start in the passing game, but that has not happened by any stretch of the imagination. His offensive line and his running game haven’t given him much help at all, and as a result, Michigan hasn’t done anything as far as moving the football. Nine of the Panthers’ first ten drives against New Jersey lasted for 20 yards or less, and the one exception was a missed field goal. Were it not for an interception that put the ball in the red zone before Michigan had even run a play; the Panthers almost surely would have gotten goosed.

The three-headed monster of Stevie Scott, Reggie Corbin, and Cameron Scarlett managed just 2.6 yards per carry against New Jersey, and the passing attack only got going on the final drive of the game, when the Generals were only trying to keep Michigan out of the end zone with a four-point lead. Michigan’s defense is going to keep it in a lot of games, but the offense appears to be a tire fire, and things aren’t likely to get better soon. Pittsburgh has given up just 54 yards per game on the ground, as its front seven has looked excellent in the early going. A team can pick apart the Maulers with a West Coast style attack, as Philadelphia did, but Michigan hasn’t shown anything that resembles an attack.

Vegas seems to have a real read on this league so far, as the favorites are 7-1 SU and ATS through two weeks. Only Tampa Bay failed to cover as a favorite in losing to New Orleans, but the totals seem to be sorting themselves out a bit. The totals were 2-2 last week, and the league has gone 3-5 to the over on the season. Both Michigan games have come in well under the total, while Pittsburgh played over last week against Philadelphia after going under in Week 1.

Clouds will dominate the sky in Birmingham, but it’s not expected to rain on Sunday, with temperatures sitting at 79 degrees at kickoff and wind blowing west-southwest at eight miles per hour.

I don’t really feel comfortable laying points in this matchup with Michigan, but I don’t feel comfortable backing the Maulers in any way, shape, or form. Pittsburgh has looked overmatched in one game and only hung around because of defense in another. Michigan has one of the top defenses in the USFL, which leads me to believe one score might actually be enough to win this game. I’ll lean toward Michigan to set up that score and go hard on the under while taking the Panthers to cover. Bet your Maulers vs. Panthers prediction FREE by taking advantage of a 100% REAL CASH bonus on your first deposit up to $300 when you use bonus/promo code PREDICT100 at MyBookie Sportsbook!